Collaboration: We permanently look for volunteers, interns and fellows in a voluntary service.

We offer Single and Project Sponsorships and welcome anyone interested. 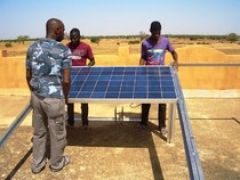 GÖTTINGEN / HANNOVER. With financial support of the Lower Saxony Bingo Environment Foundation the Göttingen Association Partnership for Rural Development in Africa (PLEA e.V.) has equipped the grammar school de l'Annonciation of the Diocese of San in the city of San in Mali with a photovoltaic system. The Foundation contributes with 23,600 Euro 85% of the cost of the plant, which will generate electricity for lighting, computers and copiers. The school in San required solar power in order to become independent of the uncertain supply situation of the city. Only one-third of the city is connected to the mains and has a very unstable power supply. Power outages are in San, as in almost all other cities in Mali, a daily occurence.

"If the solar energy ensures light in the high school in the morning and in the evenings, the percentage of successful graduations can be increased," says Dr. Denis Coulibaly of PLEA e.V. "In addition to improving the learning situation, the solar project is also reducing the operating costs of the High School and serves the protection of natural resources", Mr. Karsten Behr, CEO of Bingo environment Foundation, constitutes the promotion of the project. "This exemplary project ideally tailored to needs of the high school we want to perform similar in many other training centers in Mali," says Dr. Denis Coulibaly.

In the school run by the Diocese of San 300 students are taught. Although it is run by a Christian religious community (Famille des Soeurs de l'Annonciation) of the diocese, it offers interdenominational teaching in Islamic Mali.

Mali is one of the least developed countries of the world, "so the project funding in this country is particularly close to our heart", says foundation CEO Karsten Behr. The project area is located outside the zone of influence of al-Qaida in the Islamic Maghreb and other terrorist groups which are still active in northern Mali.

The Lower Saxony Bingo Environment Foundation supports environmental and nature conservation projects and projects in favor of development cooperation and the preservation of monuments. The foundation is financed from the gambling tax and mainly from revenues of bingo environment lottery. For more information, see www.bingo-umweltstiftung.de